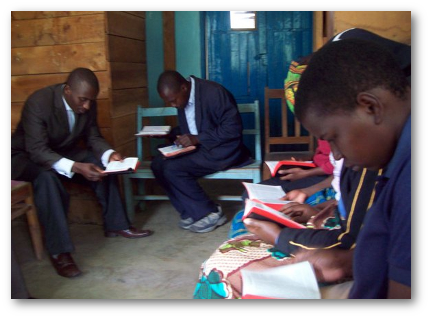 The Scriptures – The Bible is the inspired Word of God, the product of holy men of God who spoke and wrote as they were moved by the Holy Spirit. The New Covenant, as recorded in the New Testament, we accept as our infallible guide in matters pertaining to conduct and doctrine ( 2Tim. 3:16; 1 Thess. 2:13; 2 Peter 1:21).

The Godhead – Our God is one, but manifested in three persons – the Father, the Son, and the Holy Spirit, being co-equal ( Phil. 2:6).

The Son is the Word flesh-covered, the One Begotten, and has existed with the Father from the beginning (John 1:1; John1:18

The Holy Spirit proceeds forth from both the Father and the Son and is eternal (John 15:26 ).

Man, His Fall and Redemption – Man is created being, made in the likeness and image of God, but through Adam’s transgression and fall, sin came into the world. “All have sinned, and come short of the glory of God.” “As it is written, There is none righteous, no, not one.” Jesus Christ, the Son of God, was manifested to undo the work of the devil and gave His life and shed His blood to redeem and restore man back to God(Rom. 5:14; Rom. 3:10; Rom. 3:23; 1 John 3:8).

Salvation is the gift of God to man, separate from works and the law, and is made operative by grace through faith in Jesus Christ, producing works acceptable to God (Eph. 2:8).

Eternal Life and the New Birth – Man’s first step toward salvation is godly sorrow that worketh repentance. The New Birth is necessary to all men, and when experienced, produces eternal life (2 Cor. 7:10 ; 1 John 5:12 ; John 3:3-5).

Water Baptism – Baptism in water is by immersion, is a direct commandment of our Lord, and is for believers only. The ordinance is a symbol of the Christian’s identification with Christ in His death, burial, and resurrection (Matt. 28:19; Rom. 6:4; Col. 2:12; Acts 8:36 -39).

The following recommendation regarding the water baptismal formula is adopted; to wit: “On the confession of your faith in the Lord Jesus Christ, the Son of God, and by His authority, I baptize you in the Name of the Father, and the Son, and the Holy Ghost. Amen.”

Resurrection of the Just and the Return of Our Lord – The angels said to Jesus’ disciples,”… this same Jesus… shall so come in like manner as ye have seen him go into heaven.” His coming is imminent. When He comes, “… the dead in Christ shall rise first: Then we which are alive and remain shall be caught up together with them in the clouds to meet the Lord in the air…” (Acts 1:11; 1 Thess. 4:16, 17).

Following the Tribulation, He shall return to earth as King of kings, and Lord of lords, and together with His saints, who shall be kings and priests; He shall reign a thousand years (Rev. 20:6).

Hell and Eternal Retribution – The one who physically dies in his sins without accepting Christ is hopelessly and eternally lost in the Lake of Fire and, therefore, has no further opportunity of hearing the Gospel or repenting. The Lake of Fire is literal. The terms “eternal” and “everlasting,” used in describing the duration of the punishment of the damned in the Lake of Fire, carry the same thought and meaning of endless existence as used in denoting the duration of joy and ecstasy of saints in the Presence of God (Heb. 9:27; Rev. 19:20).